Just a graph to illustrate what is going on in the US with COVID-19 deaths. The top two lines are NY and NJ, the rest are the other 48 states. 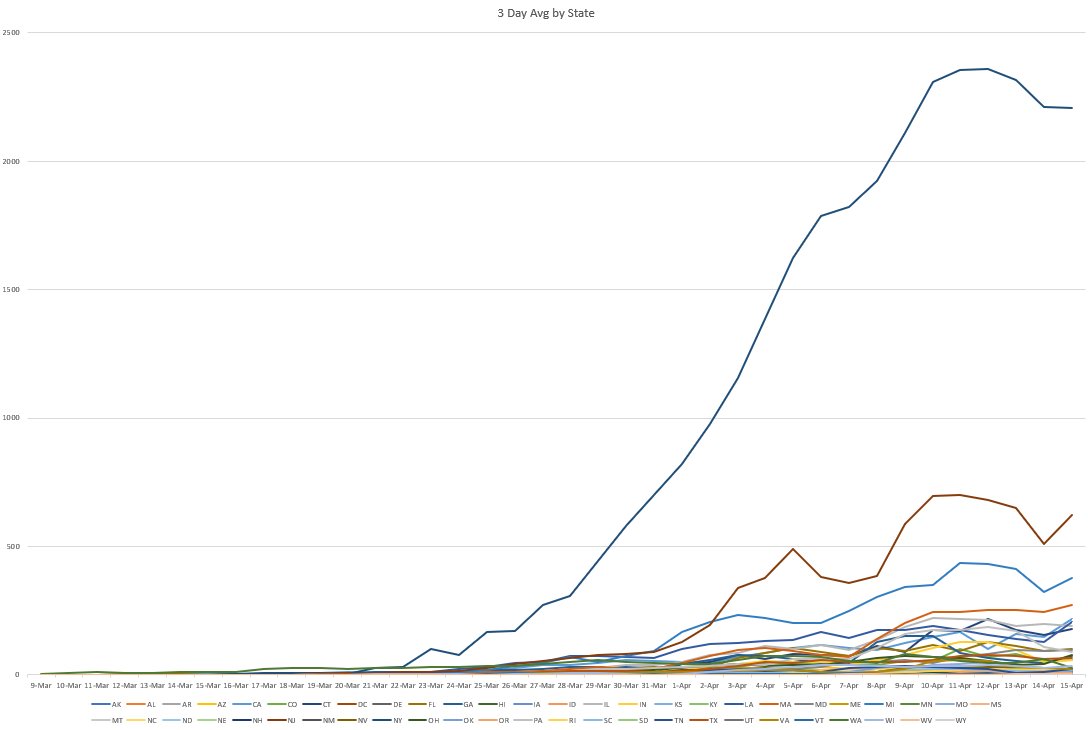 
“If I admit a patient, a [M]edicare patient, to the hospital and just diagnose pneumonia, the diagnosis-related group payment, the lump sum payment the hospital will receive for that patient, will be about $4,500,” Jensen said. “But if I put pneumonia COVID-19, it triples, it goes to $13,000.”

I am not trying to be a ghoul and say that most doctors are intentionally inflating numbers to get more money, but by the same token, I am not naive enough to think that no one is doing it. Medicare fraud occurs daily for billions of dollars per year.

Lots of points to cover!

On the origin - the CDC idea may have some merit, but that's not the one playing in the conspiracy circles (including Trump/Pompeo et. al.) at the moment - they are going after the WIV BSL-4 labs which are across town, and fairly unlikely to have been the source, especially given their documented pivot to drop existing work to actually sequence the genome. The CDC wasn't studying Coronaviruses officially, but it seems they had some people there that really liked bats, so who knows. The wet market is a far more likely vector, and definitely a known spreading point. We are sure that it is a natural evolution and not bioengineered though, which is nice.

On death rate - I'm not discounting that some deaths may not have had COVID-19 as the proximal cause, but the fact that the detection rate in the US is around 20% of tests and varies in lockstep with the number of tests being done tells me there's still about 5-10x more COVID-19 in the community that is officially recognised. Couple this with the US having some of the worst testing numbers around in per-capita terms and it's clear the numbers everywhere are going to be dramatically underreported. When the NYT recently mapped the excess mortality over historical averages I recall they came up with a massive excess of deaths beyond what the COVID numbers were saying. So, while there are anecdotal samplings that some doctors may be overreporting, there's clear statistical data that shows a significant undercount.

What was your source for that graph? It seems oddly shaped over the last week compared to other sources (CDC, JHU, NYT, etc.)

On the Chinese body count - I am usually skeptical of The Epoch Times claims when it comes to China. They've been historically pretty quick to latch onto conspiracies against the CCP and have a fairly low hit rate on it. They're not completely whacko like Infowars and other crazies though, so while skeptical I'm not discounting either. Looking at the reports on Wuhan and other provinces, I'd be more inclined to push underreporting down the hierarchy than blame the national government though. Localities are under continuous massive pressure to perform "well" and have strong incentive to hide things until they become too big. This was certainly the case at the beginning of the outbreak where the local authorities across Wuhan were trying very hard to push good news up the chain for fear of censure, and now that Xi has a narrative that things are controlled, that pressure must be enormous. I find it far more likely to believe a bureaucratic mess than a directed one, if it exists at all.

I do think the massive push from some parts of the GOP to reopen the US is extremely premature and strongly indicates an even larger second wave in a couple of months if it goes ahead. I'd argue that getting the test-positive rate below about 1% is probably the best indicator for when it's good to reopen.

Right now it is on a state-by-state basis. I don't see the West coast opening anytime soon, but other states in the middle of the country will probably start to open within two weeks.

The graph came from someone on Twitter and I believe is a 3 day running average.
Top

To be honest, I don't know enough to say whether it's a good or bad idea to open the states that have yet to be hit hard. It feels like it's just going to put them on an exponential curve again while there's (apparently) so many undiagnosed cases out there, but if they are prepared to close down hard if things head badly then it may not be too awful. I just don't see anyone enjoying opening up to shut down hard in another 4 weeks.

Interestingly, the US Government is using 1 active infection per million population as the benchmark for easing restrictions in their modelling. It's reasonable to assume that doing significantly less than that will spark a second wave.

Graph looks like it's sourced from the healthdata.org site. Fair nuff!

This backs up my early thoughts that I expressed to my coworkers, that the reason the West coast was not seemingly hit as hard as NY was because we had it at the end of January and didn't know it and we have some herd immunity going already.

Currently, CA, OR and WA combined have a shade over 50k cases while NY has over 255k. The combined populations of the 3 West coast states is around 48 million to NY's 19 million.
Top

Estimates that 9 million Americans had COVID-19 by mid March:

Herd immunity for R0 of 2.5-ish requires around 65% of the population (1/(R0 - 1)) to have recovered, and with recovery time approximately equal to death time you'd have noticed the sharp spike in fatalities to be anywhere near that level. I think the western states got spooked earlier and did the social distancing thing earlier. West coast cities aren't as compact as East coast, which will drop the effective R-value. NYC is ridiculously compact, and with people sharing laundries and other confined spaces regularly you'd expect to see a lot more transmission than LA or Seattle.

8 million seems high for early to mid March. You'd expect to see over 150,000 dead by now if that was the case (or we've wildly overestimated the CFR). I could easily believe 1 million though. Current models seem to be suggesting 25k-30k, but that's probably conservative. Can't find the graph now, but I remember seeing the US having a sharp spike in "Flu deaths" before the first COVID attributed deaths. I suspect they weren't flu.

Most data I've seen indicates the true infection rates in the US is around 4-5x the positive testing rate, so probably around 10% of the population at the moment. With current distancing efforts, that's likely enough to burn it out over a few months.

I don't think we've overestimated CFR. It's sitting around 1.5% in Australia and we're getting pretty close to having no new daily cases.

Well, one way to find out would be to ramp up antibody testing.
Top

Checking in a few weeks later, hows everyone hanging?

Great convo's there guys, its such a rough topic. Still laid off and collecting, hanging in there! It will be interesting to see what happens this fall during regular flu season. What happens with covid will be very interesting.

If it's any consolation, summer didn't seem to make any difference here in Oz. I wouldn't get too excited about summer changing things in the US, except maybe reducing the number of Flu strains flying around.

Agreed. Aside from killing the virus on outdoor surfaces, summer won't have much impact, especially if we are all indoors breathing recycled air.
Top

There is now also dispute in the medical world over the efficacy of ventilators in treatment of COVID-19. Ventilators operate using high pressure normally on patients whose lungs are otherwise fine to keep them breathing. COIVID patients already have lung damage from the disease and the ventilators exacerbate that damage. A new treatment using CPAP and oxygen is being evaluated.

Here is one article were the Dr. declines to recommend CPAP and O2 not because it would not be effective, but simply because current protocol is to eliminate the chance of spread, and intubation is the best course of treatment to meet that goal.

So the question becomes, are ventilators the best treatment for a COVID patient, or simply the safest to prevent spread? Are ICU's following the "do no harm" protocol, or using the safest option?

Are we going to find out that ventilators are what killed most of the people we were trying to save?
Top 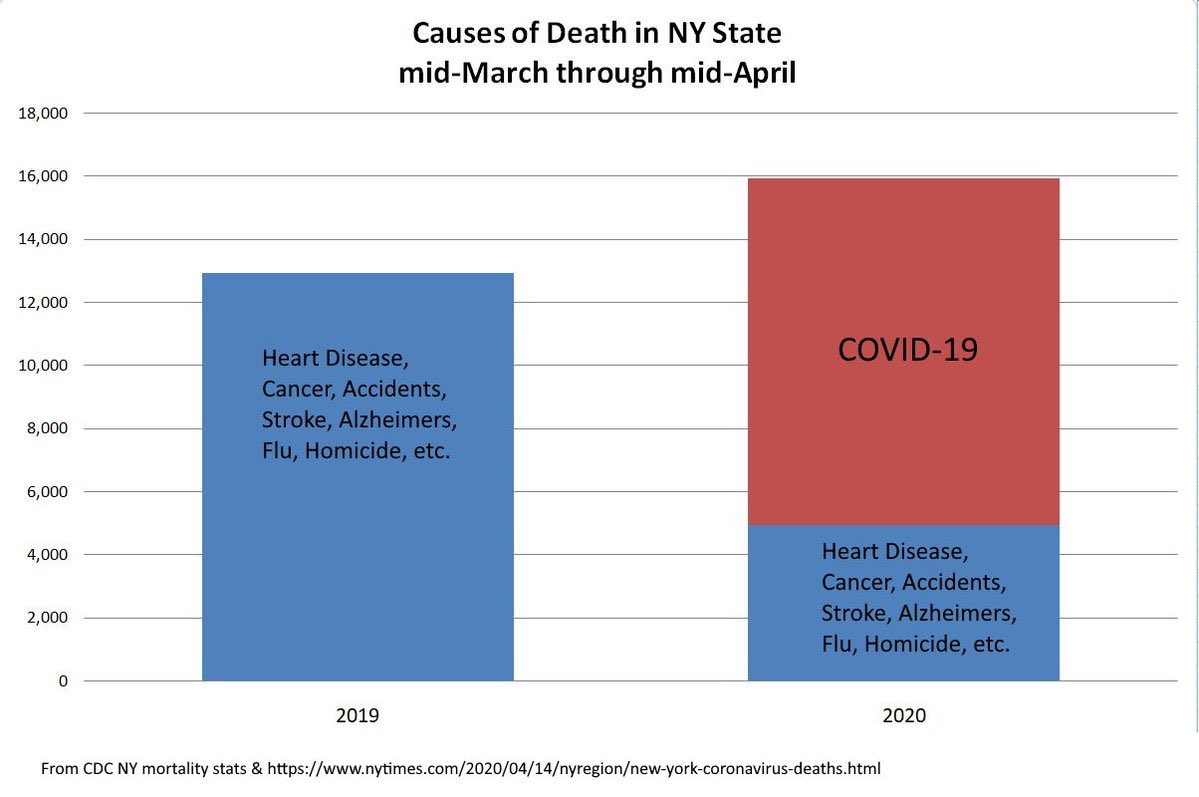 BYD was removed from Federal purchasing lists due to poor quality.
Top

The math of the Coronovirus:

Why Sweden's approach to COVID-19 is likely working statistically. They are protecting their most vulnerable rather than the least.

We know where the most vulnerable are, why are we not screening everyone who could come in contact with them? Why are we locking down perfectly healthy people and abandoning those that need us most?
Top

Florida seems to have got it right: